Modern design of a mini apartment in berlin, germany 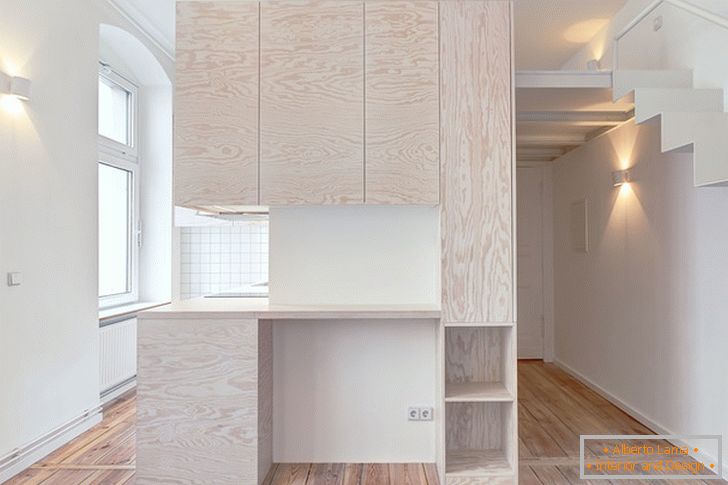 Design of a mini apartment in the old house

The design of a mini-apartment always requires its authors to take into account the needs of customers and ingenuity in detail. In this sense, the interior designers of a small German apartment, which will be discussed in this article, created a real miracle!

The Wonders of Transfiguration

The decoration of the interior of the apartment, located in a classic house of the XIX century, required the introduction of major changes in the architecture of the space, the area of ​​which was only 21 square meters. meter. Earlier there were two rooms, one of which served as a kitchen. The shared toilet was in the annexe on the street.

The new owner demanded to organize the space so that every centimeter of it was used rationally. Therefore, the project began with the total dismantling of all internal walls and old coatings. 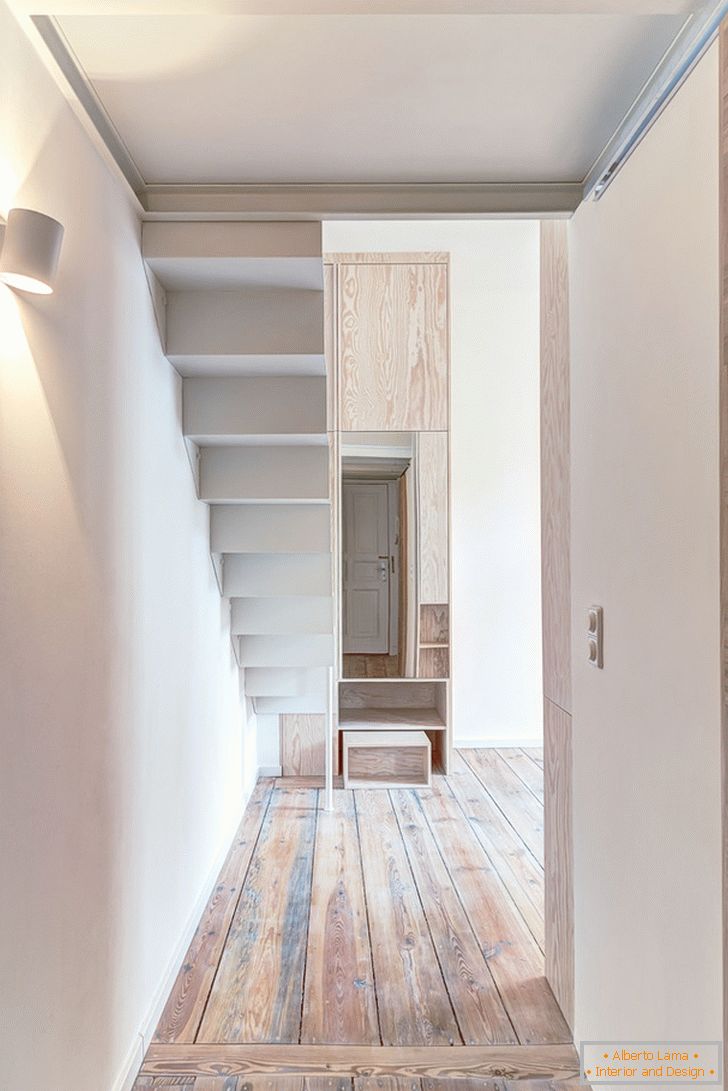 The interior of the apartment was supposed to provide a comfortable sleep and rest, and it is necessary to include a kitchen, albeit very compact. The project provided for a large number of places for storing things, as well as a small bathroom with a shower, a full sink and a toilet. It was assumed that the design will contain elements of art-nouveau style as a reminder of the period of construction of the house. The idea was realized in full. 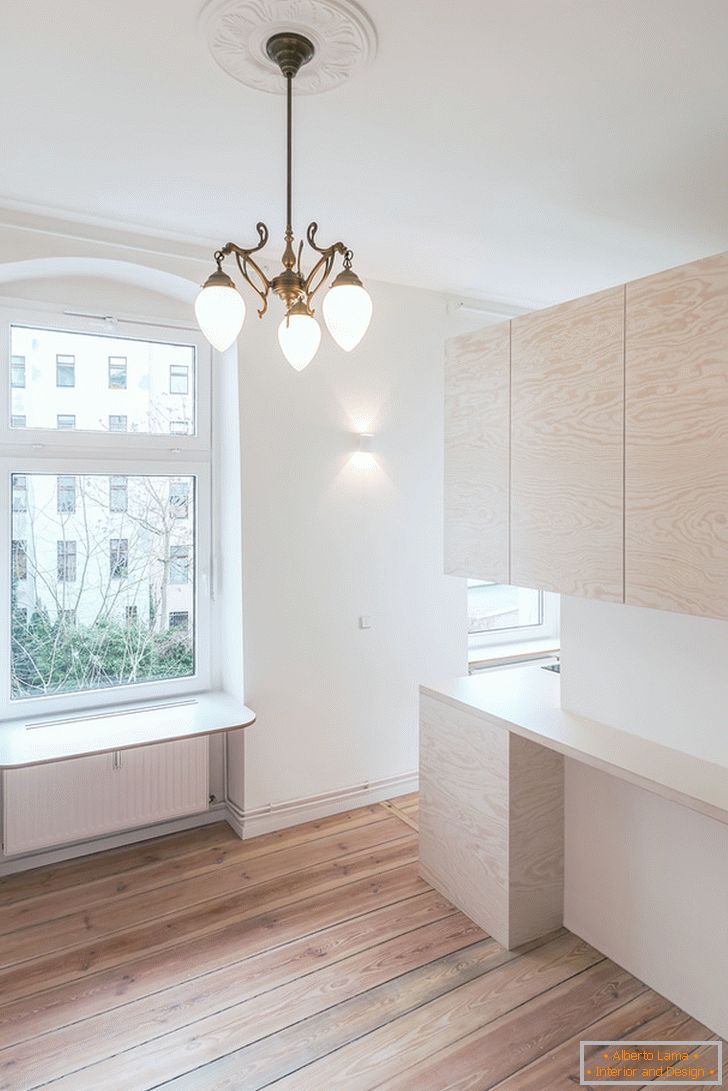 The old, worn parquet was dismantled and replaced by a floor covering of recycled wood. A protective layer was applied to the old dust-attracting ceiling. All sanitary ware were also replaced. 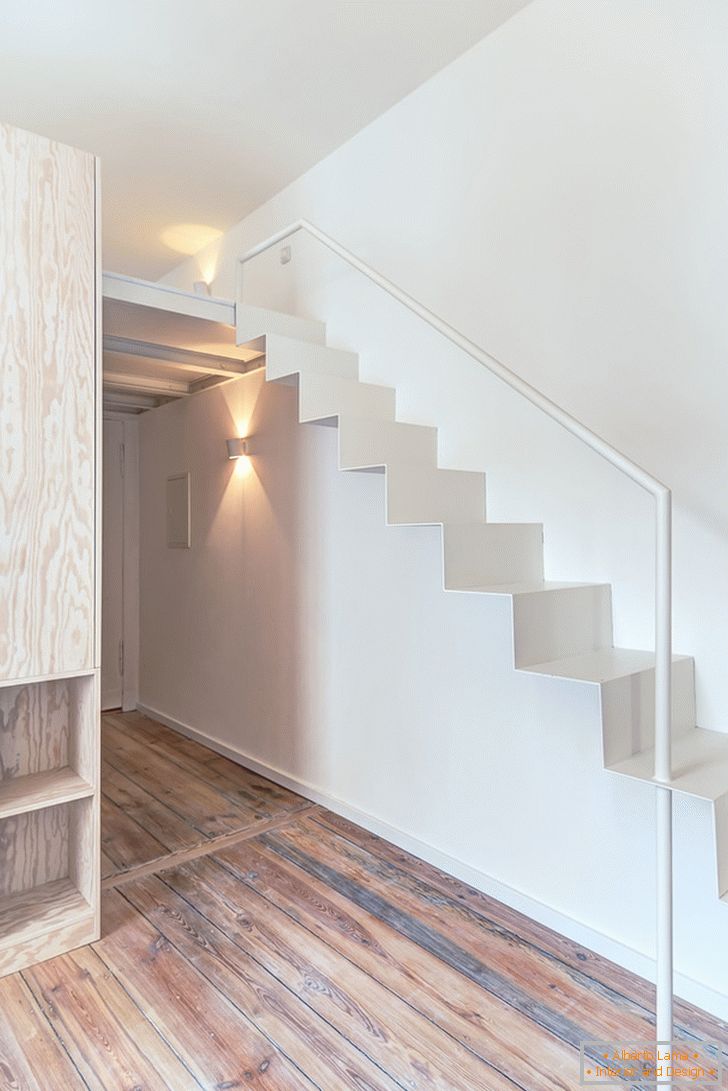 Tiers in the mini-apartment

Since the height of the ceilings in this old house is 3.5 m, the designers decided to "squeeze" the maximum out of this feature. So, the ceiling of the bathroom was lowered quite significantly, in order to free up space for the arrangement of mezzanines.

Specially designed suspended ceiling structure contains a metal frame. Steel construction beams 8 cm thick are visible from the hallway. They have become a reliable support of the semi- storey. 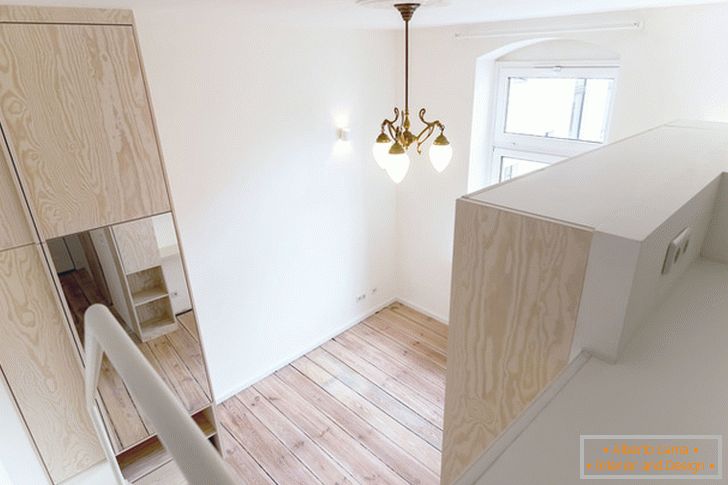 Bathroom lighting is provided by the presence of a window in the new ceiling. And on the side of the mezzanine level, the ledge of this window serves as a shelf for books or a laptop. 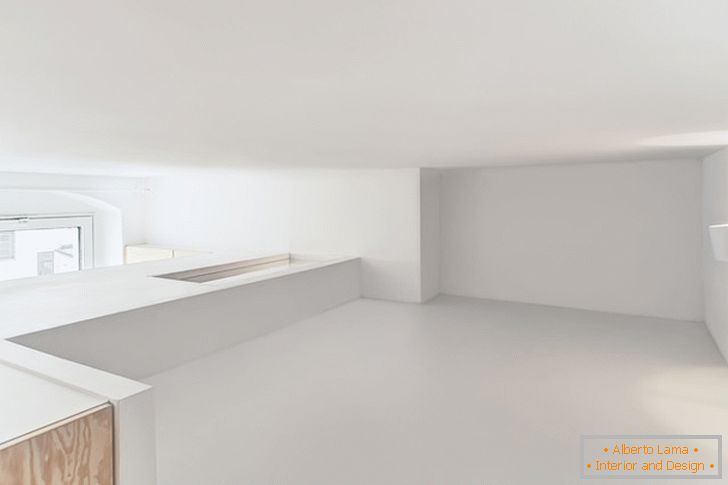 An exquisite but reliable stainless steel ladder is attached to the load-bearing wall and is used as a transition between two levels.

Rejecting the ladder in favor of a simplified but robust design, the designers ensured that residents could use the steps in the role of book shelves. They also provide access to a tall two-story cupboard. 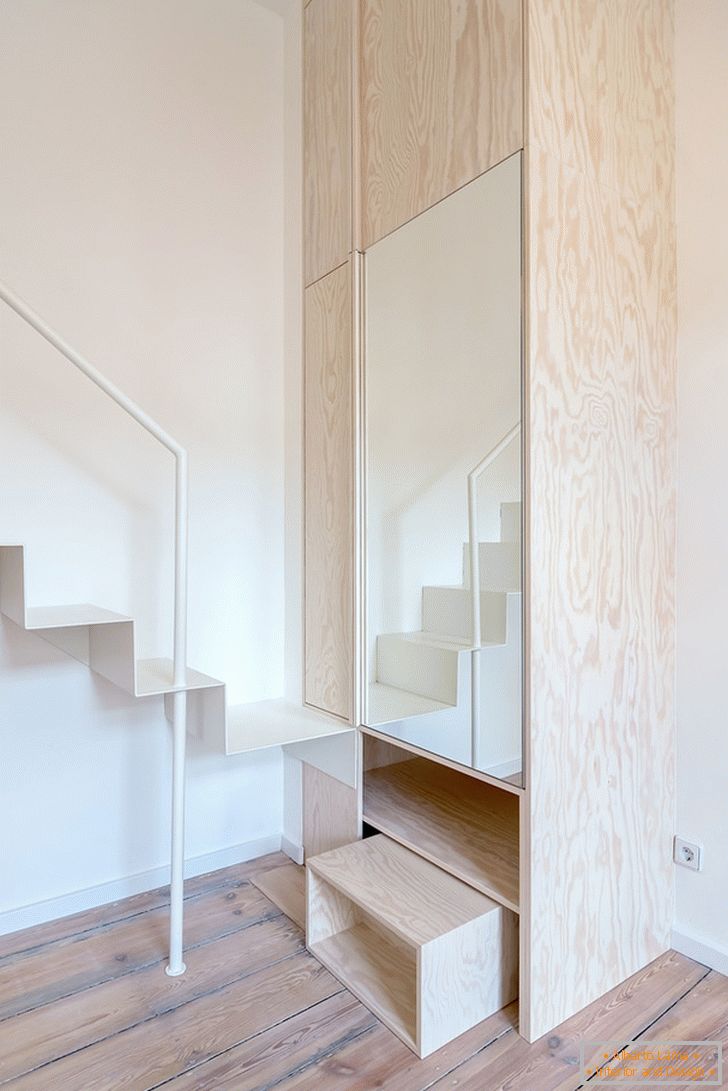 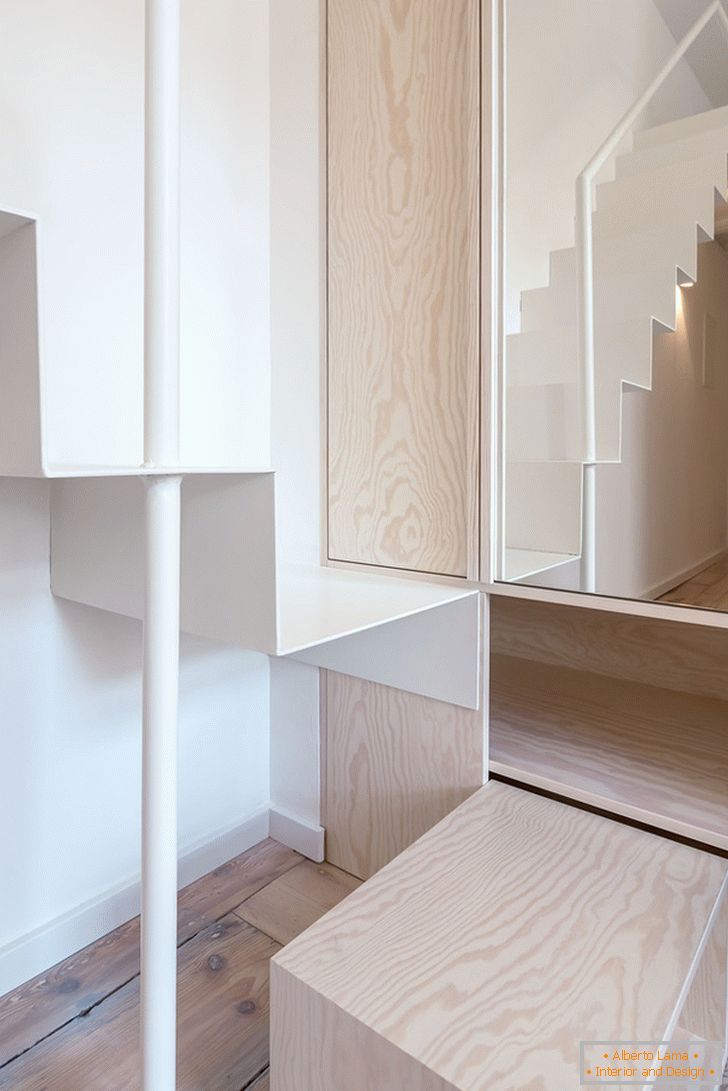 The space of the "first floor" remained free, revealing a view of the hallway, the kitchen and the superstructure. Customers are invited to decide for themselves how to equip this place. 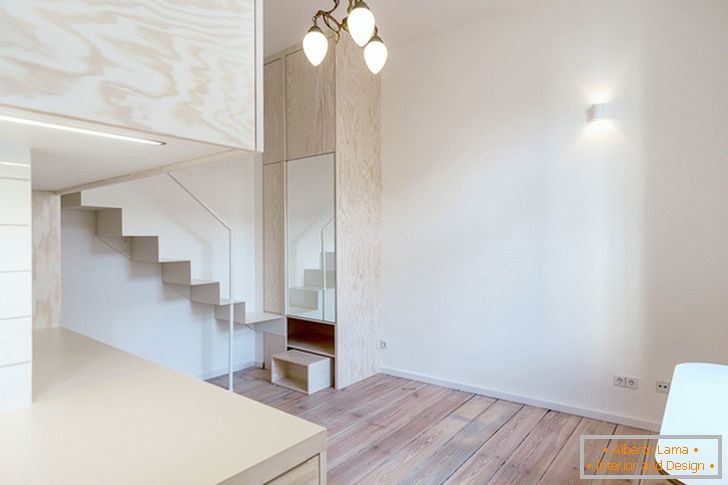 The window sill of the living room can be assigned to an additional workplace, and a window opening in the kitchen can decorate indoor flowers. By the way, from all the windows of the apartment you can see a nice courtyard. 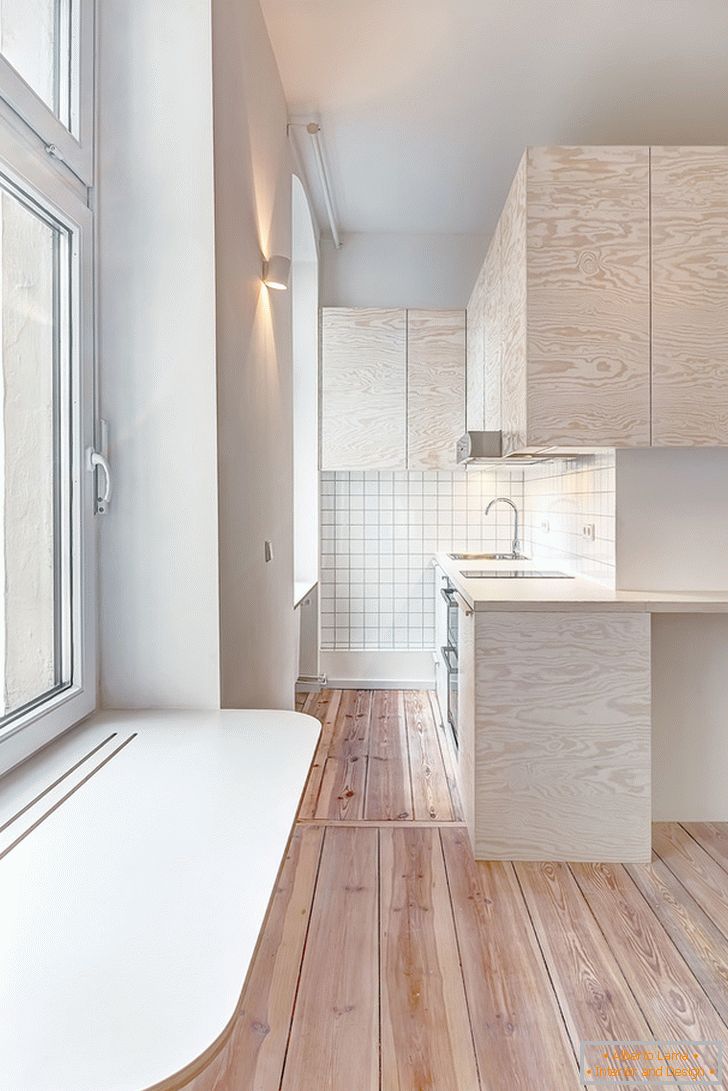 All furniture is made of light pine wood. The miniature kitchen, as planned, contains everything you need, and the hanging cabinets that envelop the corner of the living room contain a lot of necessary things. 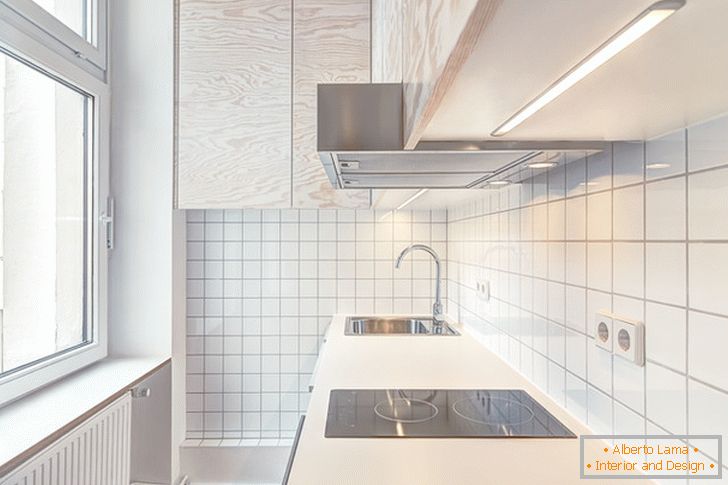 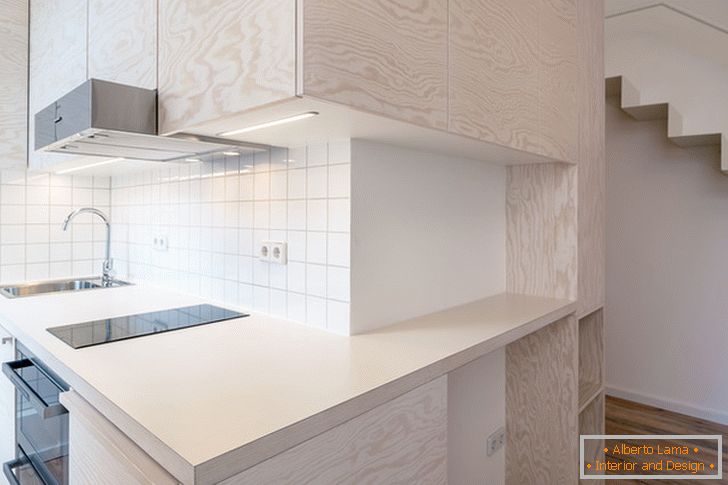 The mini-room in the middle of the apartment became the basis for placing the most important elements: kitchen cabinets, ventilation system, concealed sanitary ware, storage room in the living room, hallway and a sliding door.

Sliding door of the bathroom is made of parquet boards, before the repair served as a floor covering. In the rest room, everything is placed very compactly, but not at the expense of functionality. A sink with a hanging cupboard and a shower room take up a lot of space here, but the abundance of light doubled by mirrors gives the room a visual volume. 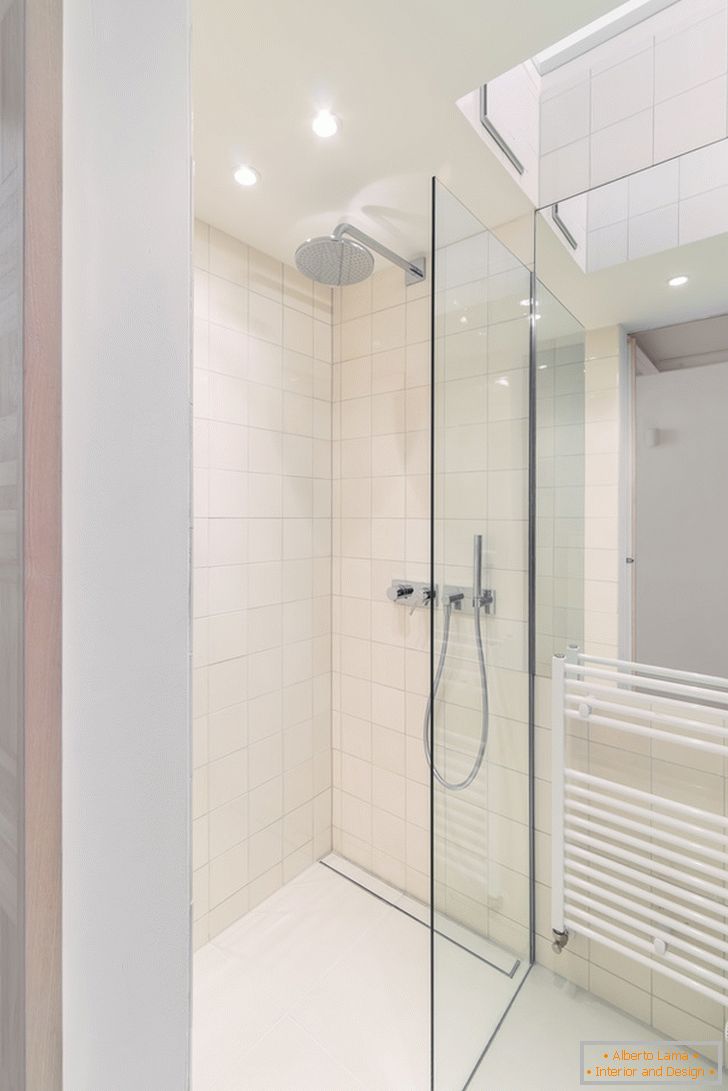 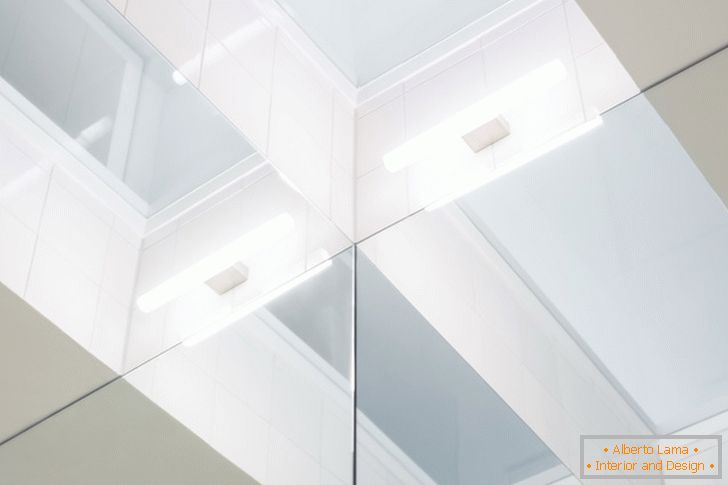 Ornament of blue tiles is effectively combined with the beetle surface of beige tiles. Responding to the customer's requirement, these color elements just emphasize the interior's belonging to the Art Nouveau style. 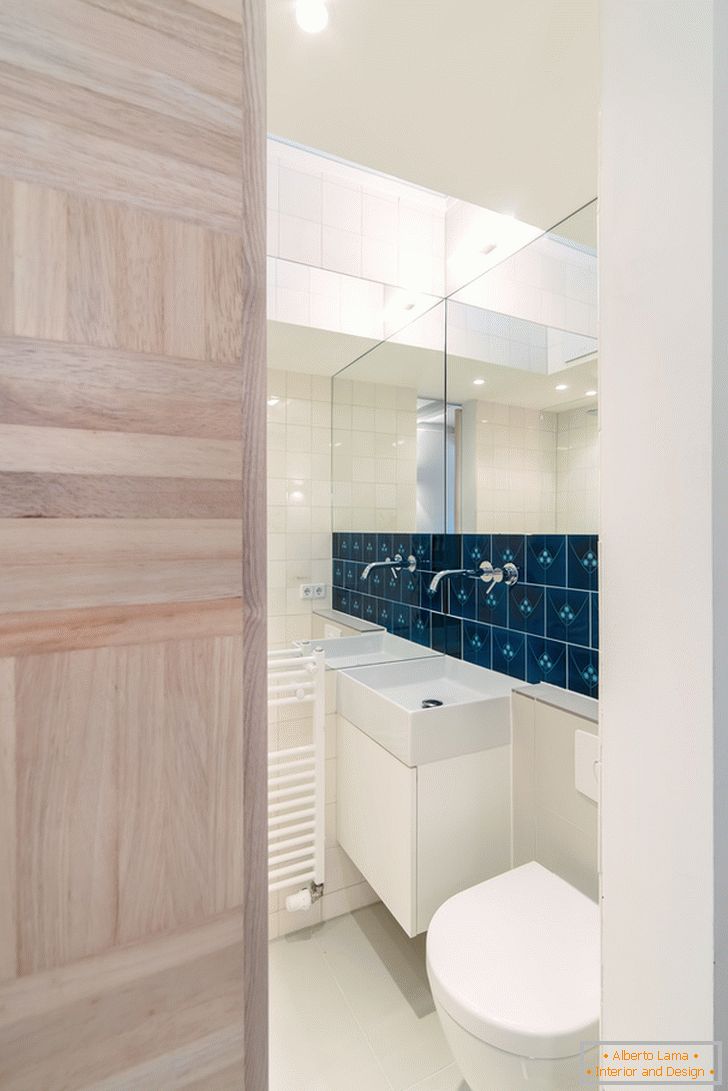 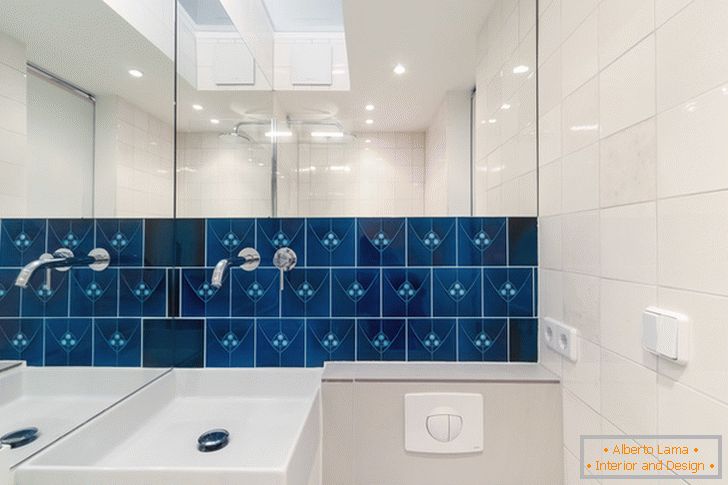 The task of redevelopment was the creation of an organic light space in the compact perimeter of the apartment. Designers perfectly coped with the task, finding a rational use of each centimeter of vertical and horizontal surfaces. 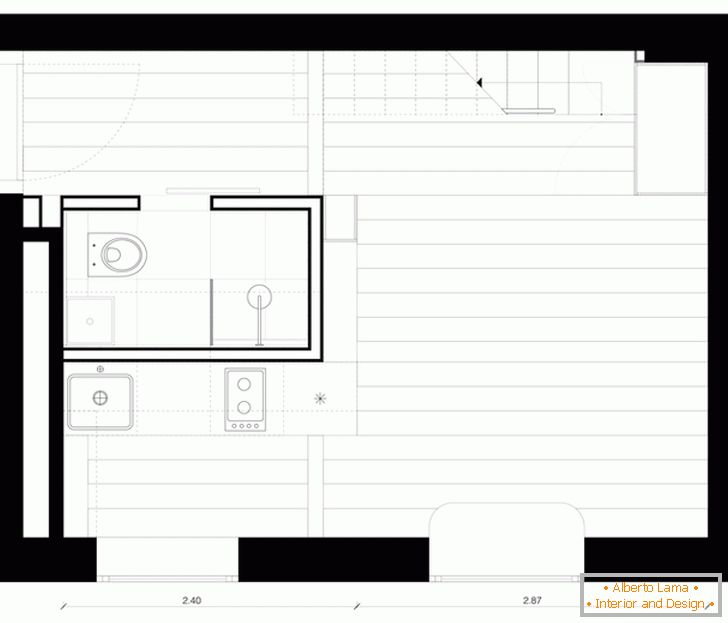 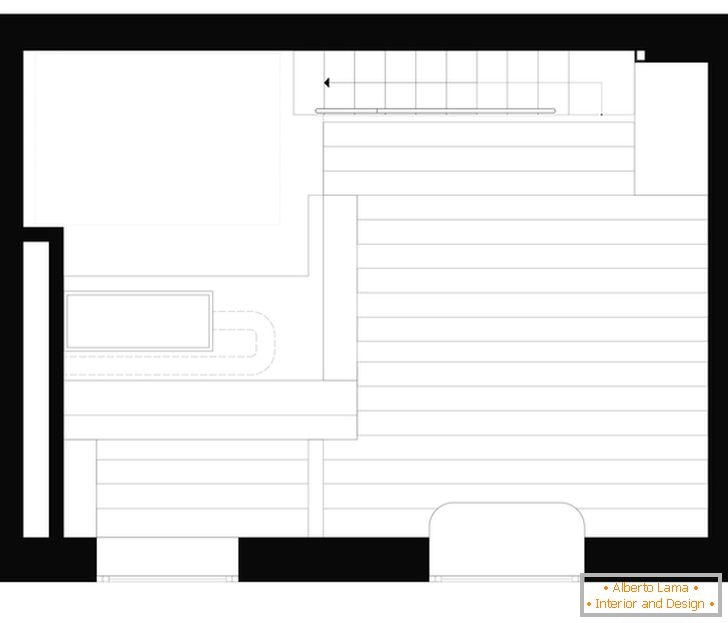 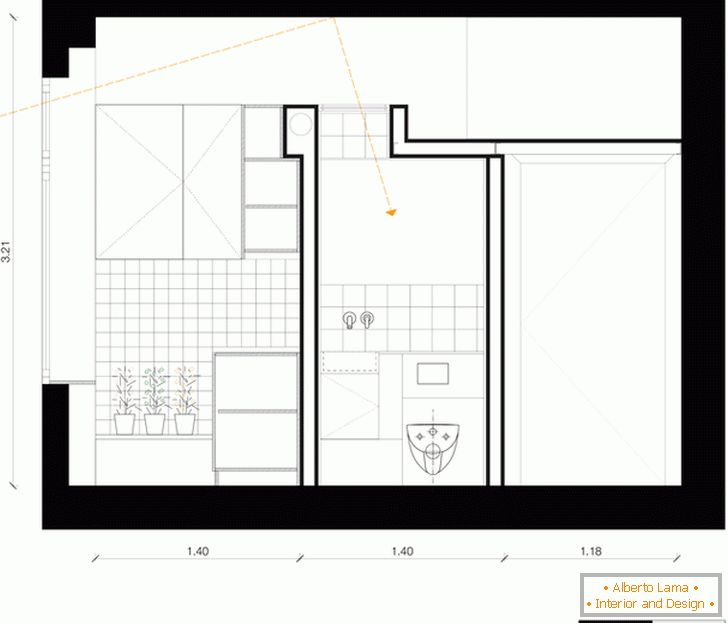 Such a two-level apartment can become a standard of competent use of expensive residential space in large cities. What do you think about this planning? Share your opinion with us. 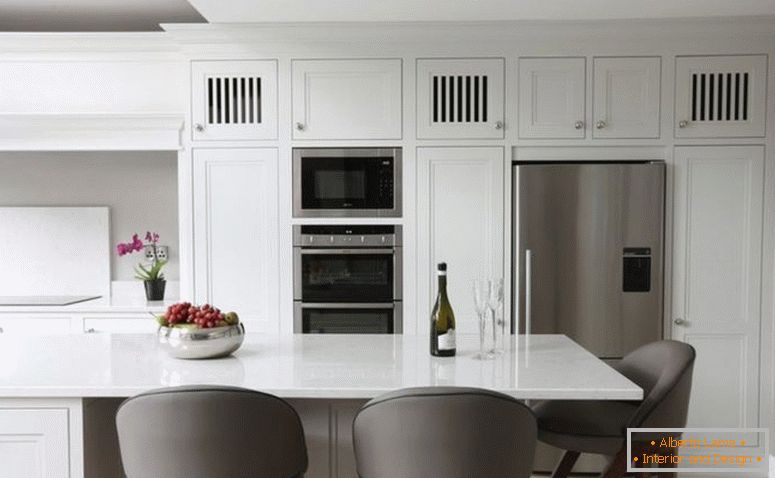 A modern kitchen interior - 70 photos of the best novelties 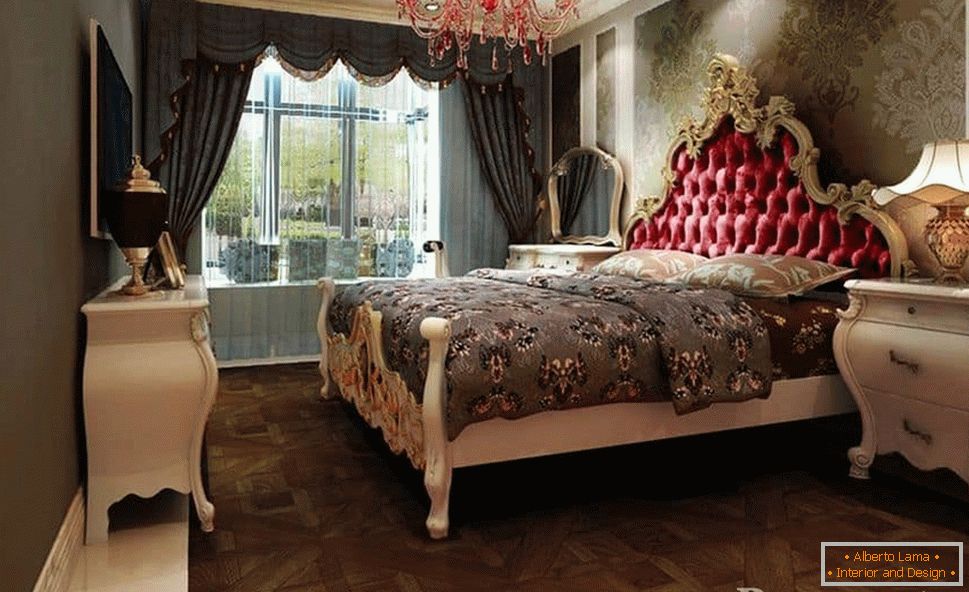 How to make coffee with a popcorn machine

Through thorns to the stars - the original kitchen-chess for

Design of the private house 2016 - modern trends in the

Living room in a modern style: photos of the best design