Soon the summer and on a hot day especially would like a little coolness, many just leave for the beach, but there are those who have their own pool or have the opportunity to go to where it is. We present to your attention a selection of 12 colorful designs of modern pools. 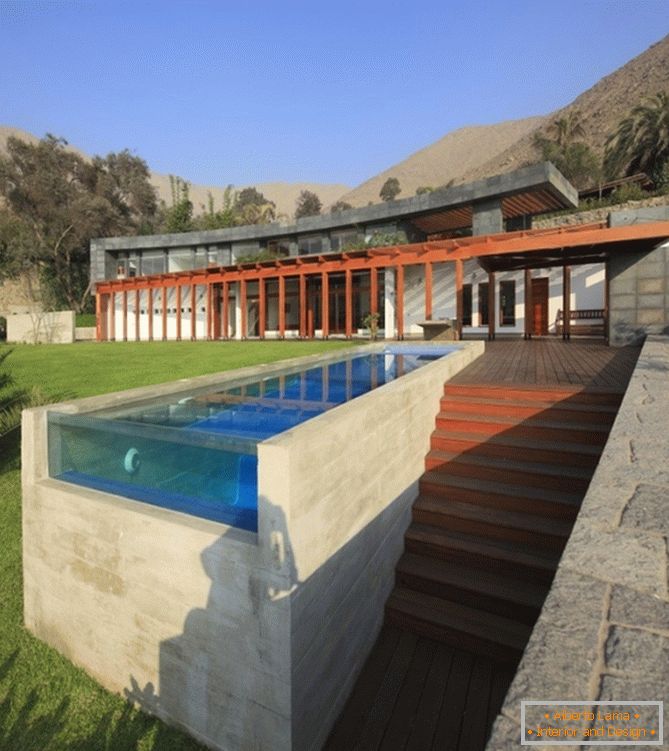 The photo above shows CyD House from the V.Oid Architecture studio. In the hotel there is a pool with concrete walls decorated with bright blue mosaic, one wall is transparent, revealing a view of the local nature, right from the pool! 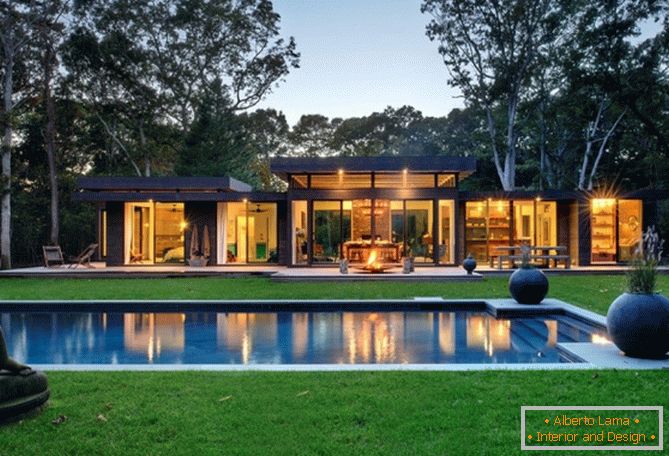 The next pool is represented by a group of architects Bates Masi, the house was made for a couple from Manhattan. Drowning in a tall green grass, surrounded by Buddha and light light, the pool here is a symbol of peace and solitude. 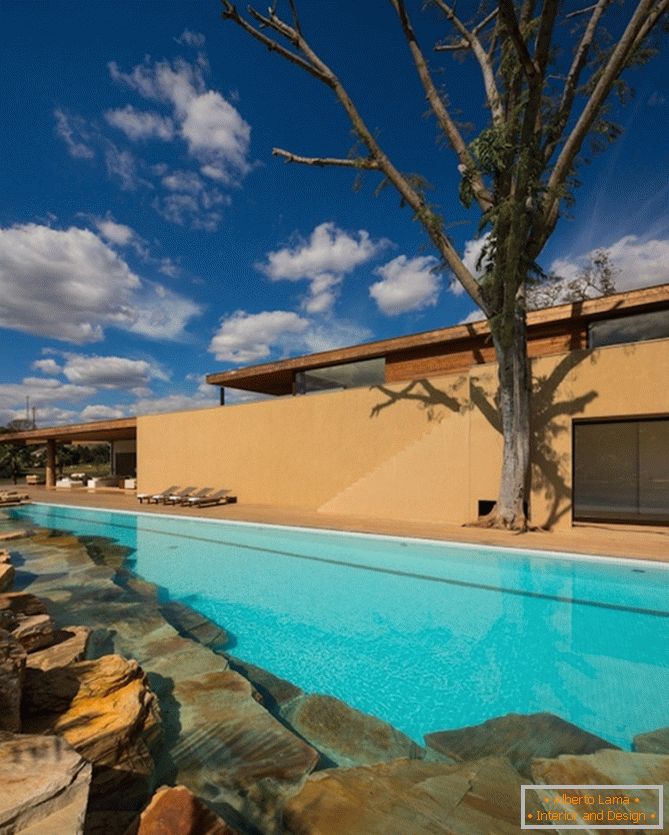 This house is located in Brazil, an hour's drive from São Paulo, was designed by Arthur Casas for a young family. The bottom and walls of the pool are made of stones irregular shape, which gives him, in some way, a bit of savagery and primitive. 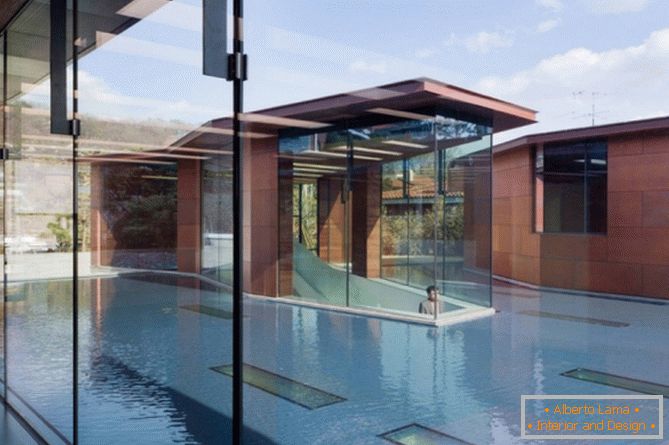 Here is a private gallery-residence, which was designed by architects from the studio of Stephen Hall, in Seoul, Korea. Surprising is the design of the residence and, in particular, the location of the pool. It is located between two sections of the house and the main entrance to the lower room, so it creates the feeling that you are going down under the water! 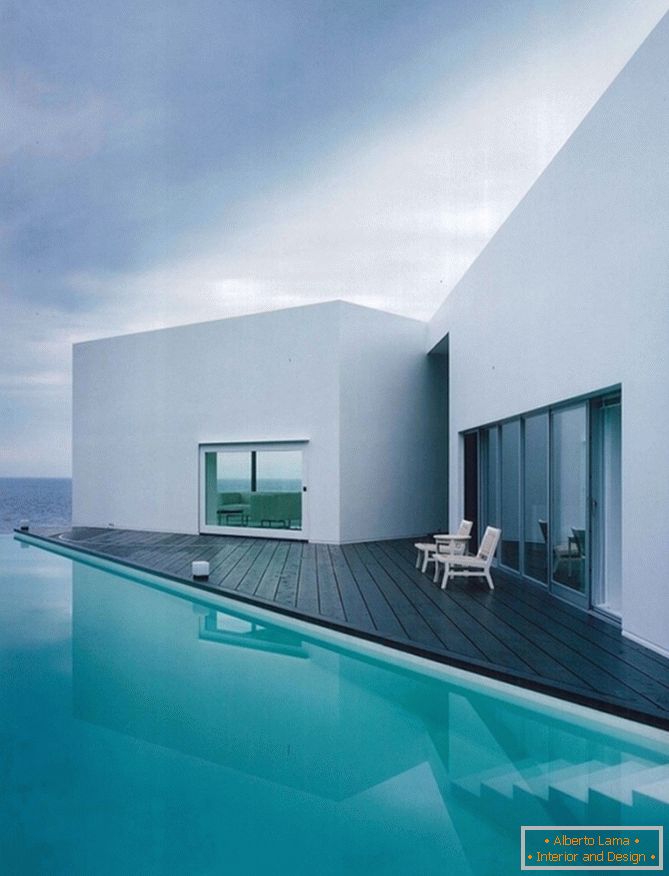 Angular and simple forms of a modern house by the ocean from the studio ANDO Corporation, only emphasize the laconicism and elegance of simple forms. Under a certain foreshortening, a feeling is created that pool goes right to the ocean! 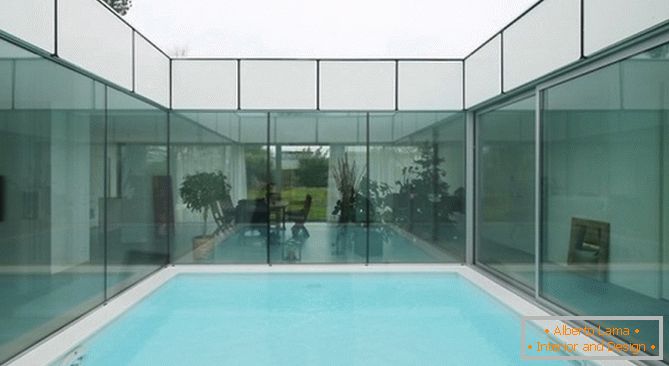 The straight-line pool from the Avignon Clouet studio is the central element in the house. And at night it becomes also the creator of a romantic mood in the house, with a special highlight, it creates a romantic glare throughout the house. 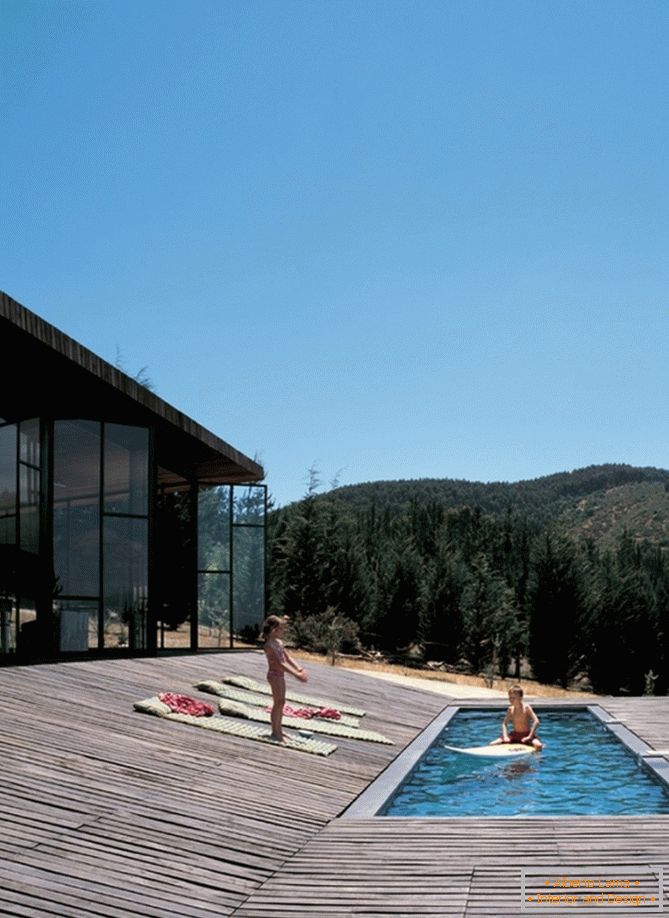 A wooden house in Chile from the architects Assadi + Pulido was jokingly named a deck. And the unusual location of the pool is a confirmation. The wooden slope to the pool is very convenient for the arrangement of sun beds, as well as the beaches of New England. 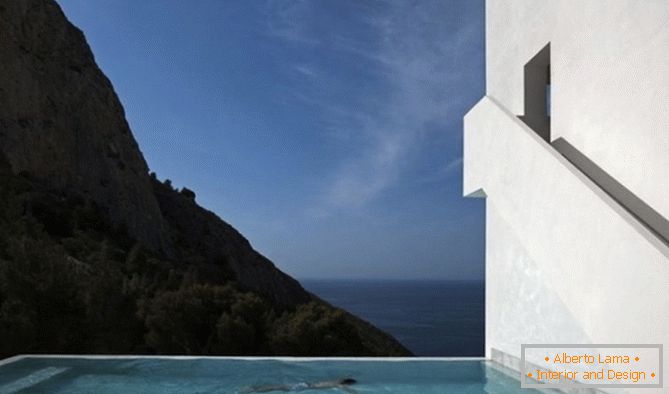 Architects from Fran Silvestre, Valencia, Spain, developed this simple but exotic corner of tranquility and bliss, calling it House on the Rock. 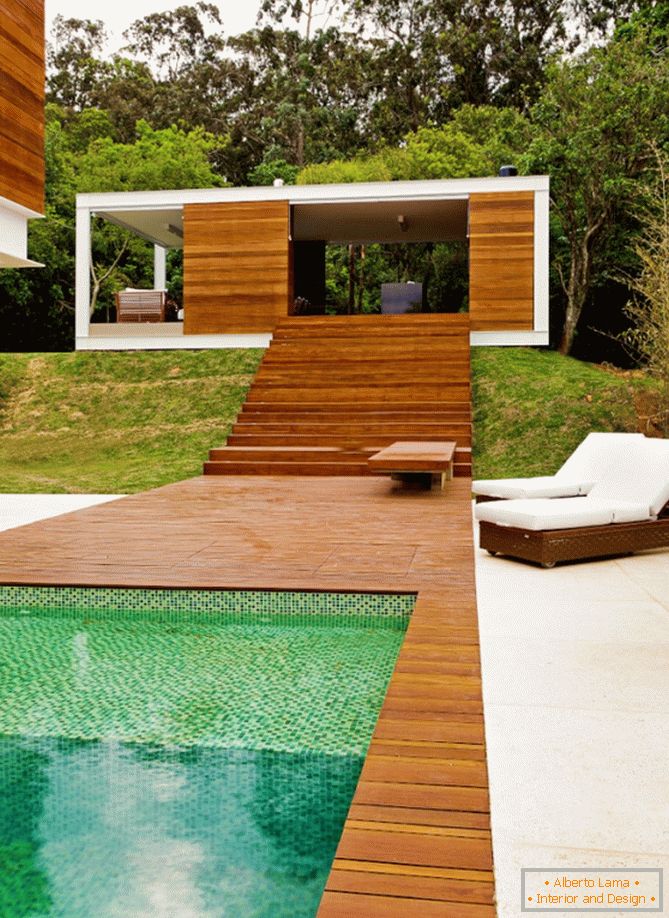 4D Arquitectura built this colorful home house of Haak in Brazil. The architecture of the building itself is pretty futuristic, but as for the pool, everything is quite simple, but the green mosaic at the bottom of the pool is very beautifully combined with the environment. 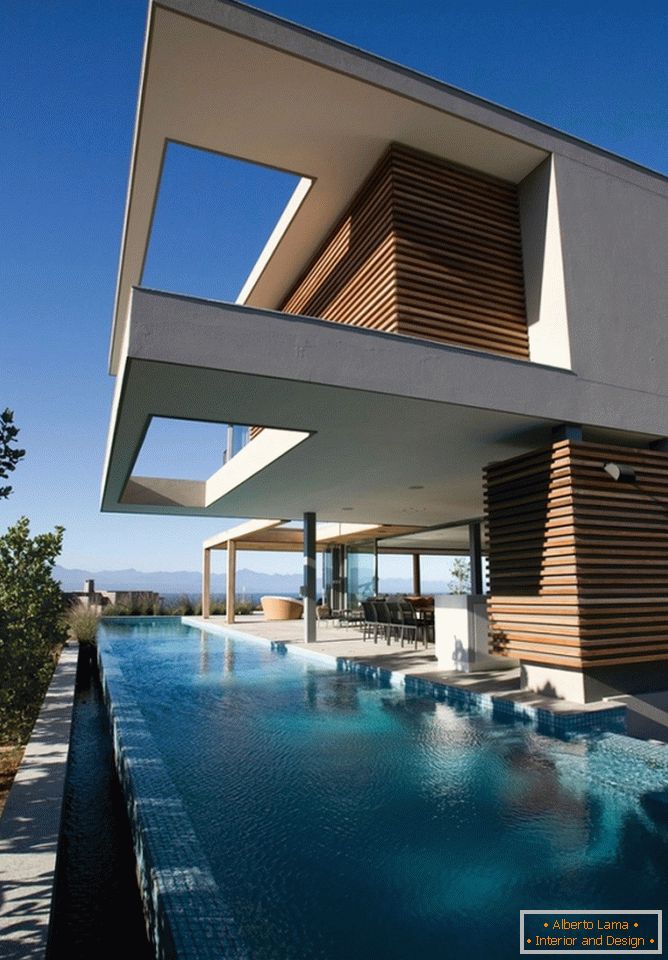 Studios Stefan Antoni Olmesdahl Truen Architects, better known as SAOTA has developed a six-bedroom house on the beach of South Africa. The long and direct pool is closely connected to the terrace of the house and has a colorful view of the ocean. 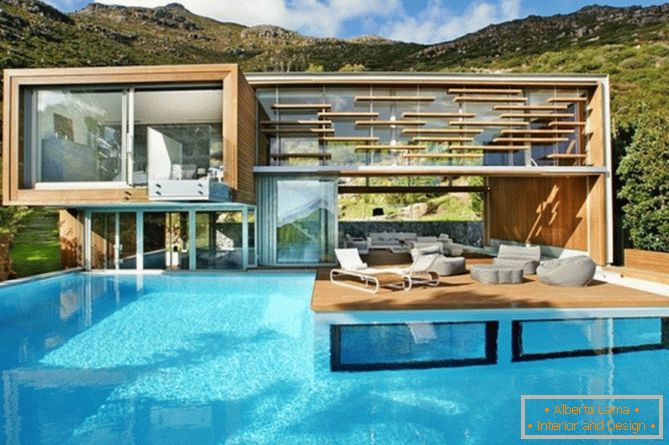 A spa house from Metropolis Design in Cape Town, South Africa has a small deck that has been specially designed to look like a raft. But what's more, under this improvised raft, there are small windows that allow you to feel deep underwater while on the lower level. 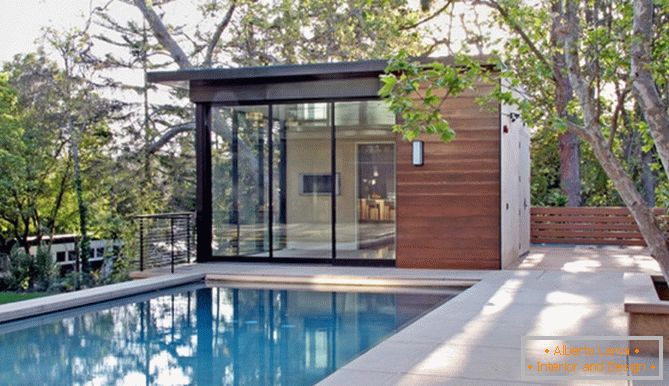 William Hefner's studio designed this house with a swimming pool in Brentwood, England. The house looks very simple, laconic and inexpensive, but the pool is still there and it looks very much there even to the place. 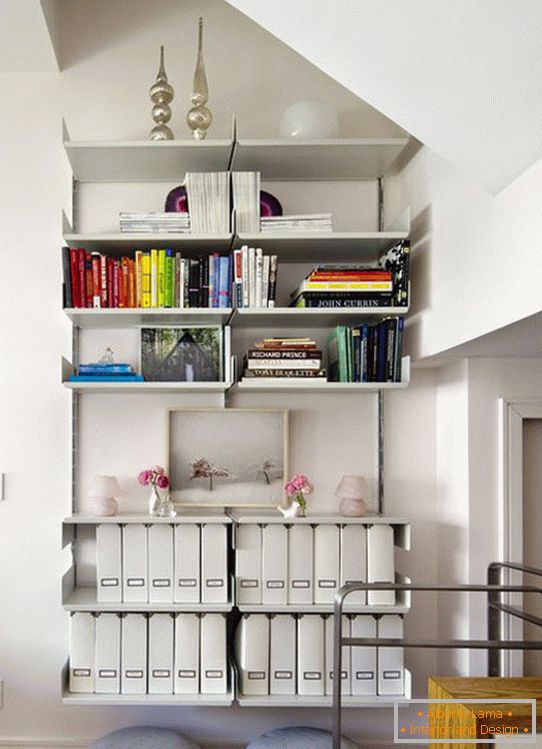 Elegant studio layout of a small apartment - emancipation of 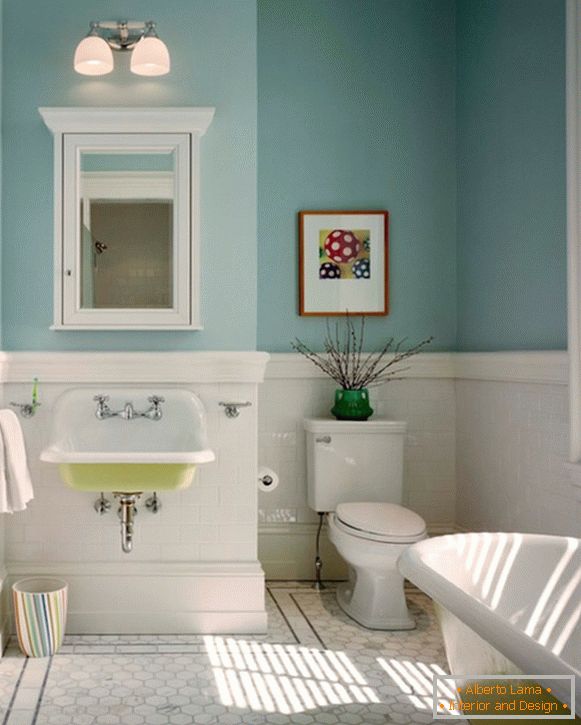 Interior design of a small bath - 80 photos of an excellent

Amazing pictures of iris scott, painted with a finger