A wonderful example of an increase in the area of ​​a 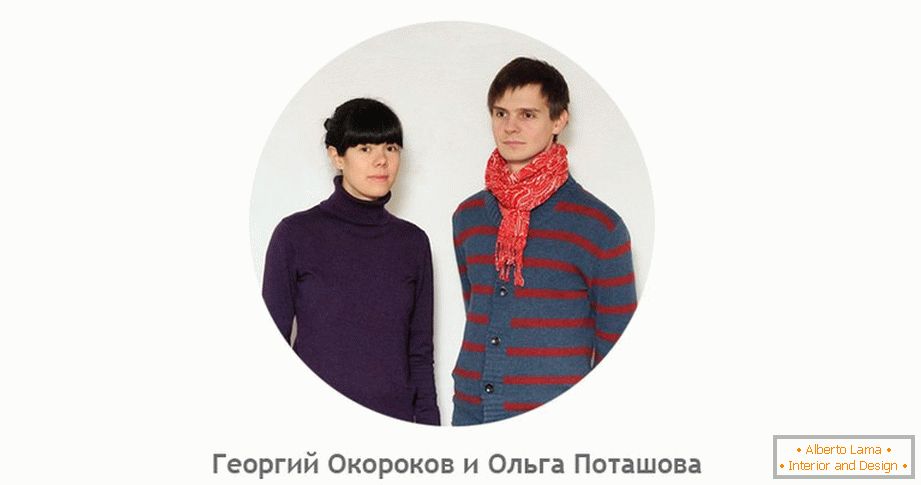 A small apartment in the old house of St. Petersburg was completely redone. From non-residential premises of non-standard form, they created surprisingly comfortable housing thanks to the efforts of two charming authors working in the studio of Architales.

George successfully graduated from SPbGASU, but Olga studied abroad, in Asia, she graduated from the American University. They started the creative way together 7 years ago, but only after 4 years they opened their own studio.

What the designers tell about their work: "We constantly follow the projects of famous creative personalities of our time. We really like the work of Andre Putman, Axel Vervodt, Jacques Grange and Takashi Sugimoto. "

Professionals of the company Architales specialize in creating design interiors. But recently in the projects of the studio it has become noticeable to increase the number of objects created by personal sketches and sketches. All parts are made from natural materials only.

The area of ​​the apartment, above which Olga and Georgy began work, was about 40 squares, but after a radical redevelopment, it increased by more than 10 square meters. meters.

At first this apartment was not at all like a room intended for people living. It was a dilapidated building, not equipped with a bathroom. As for the ceilings, in this house of the old planning they were at a level of three meters, and the height of the building itself was almost five. It was thanks to this height that it was possible to create a second level, where they placed a bedroom and a bathroom. 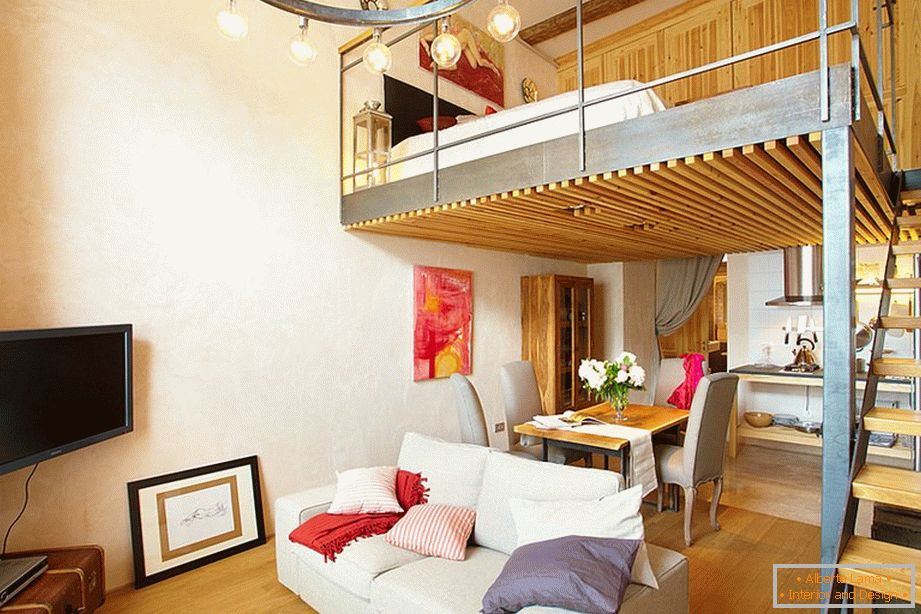 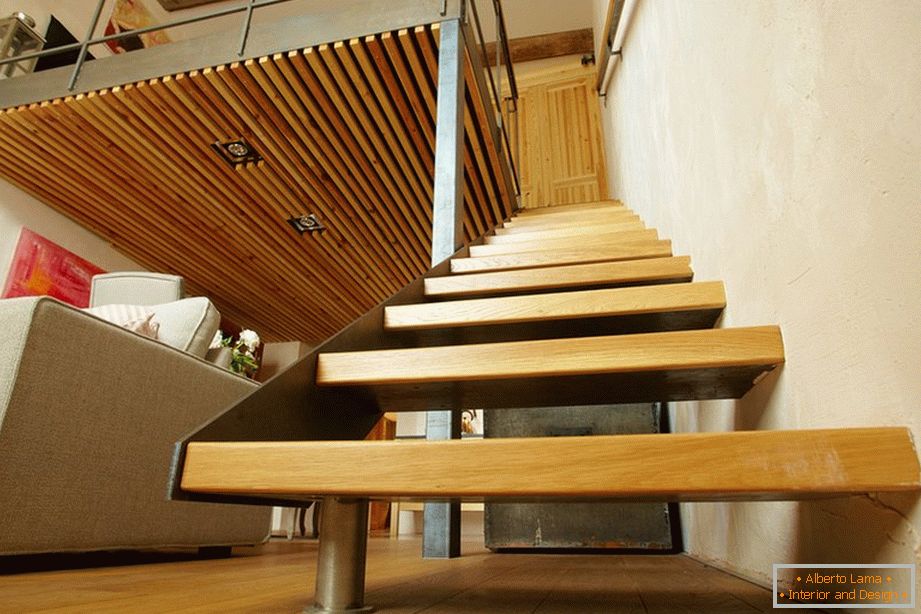 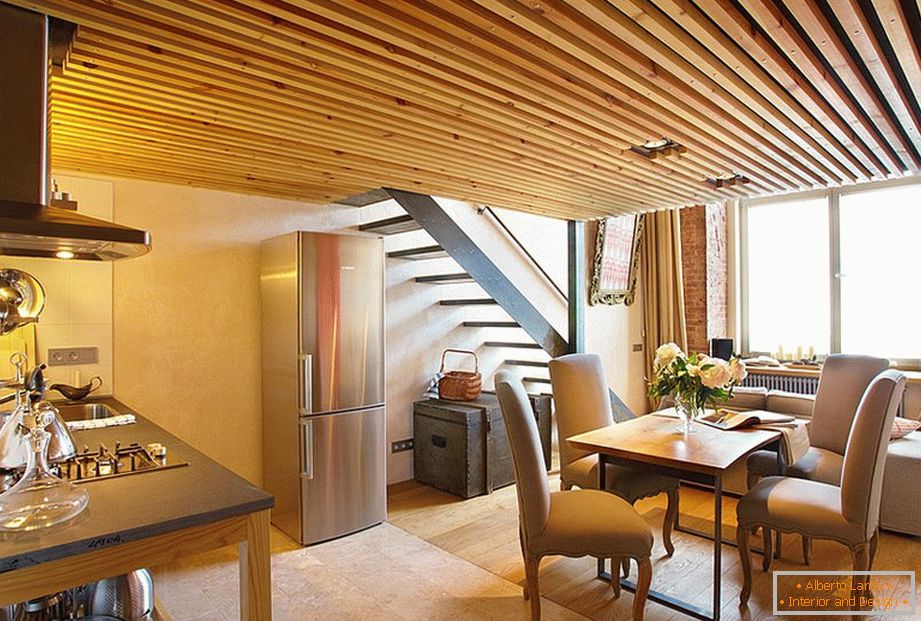 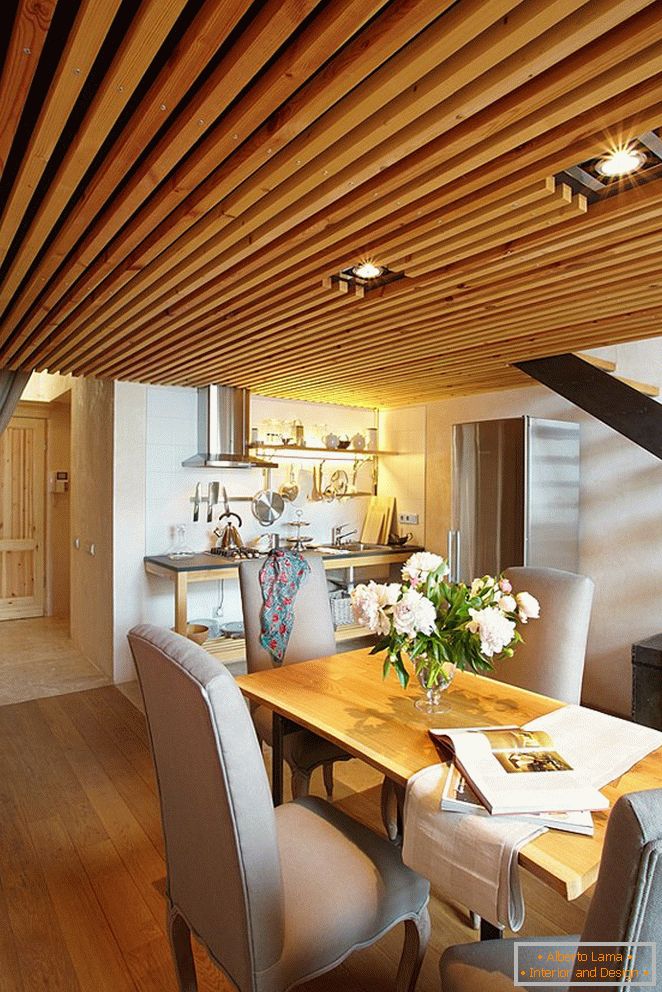 Since the customer did not plan to live in this apartment personally, but was going to rent it, he wanted to make a rationally planned space for comfortable temporary living.

During the discussion of this project, the idea of ​​creating a second tier came by itself. It turned out that the client, like the designers, loves natural materials.

As for the choice of style, the customer did not make specific wishes. The main task was to make a multifunctional and comfortable room. For the second level allocated as much space as necessary to place the bed there. Thanks to this, it was possible to make the living room as bright as possible.

The whole house was filled with objects that have their own amazing history. As a result of registration, taking into account all the preferences, wishes and requirements, we got an interesting modern eclectic. 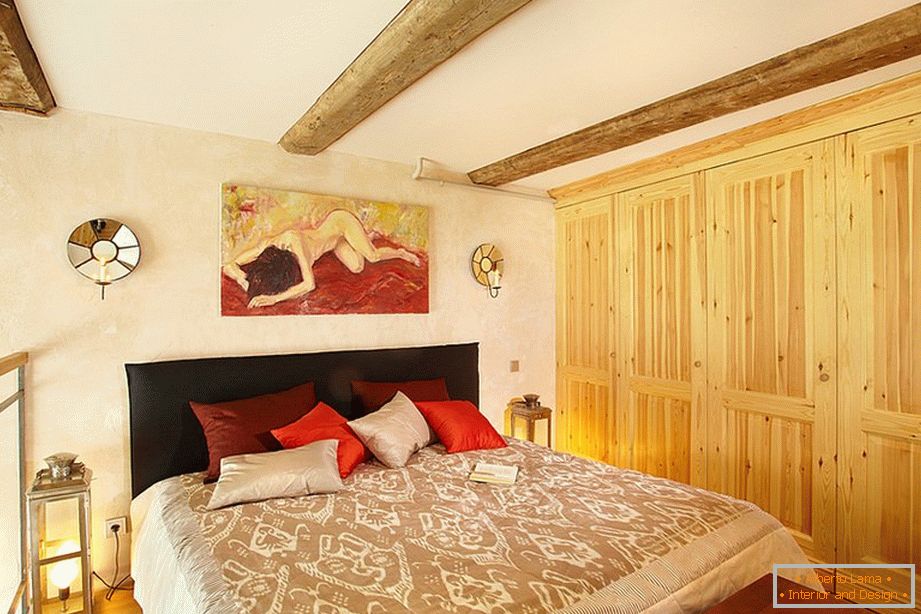 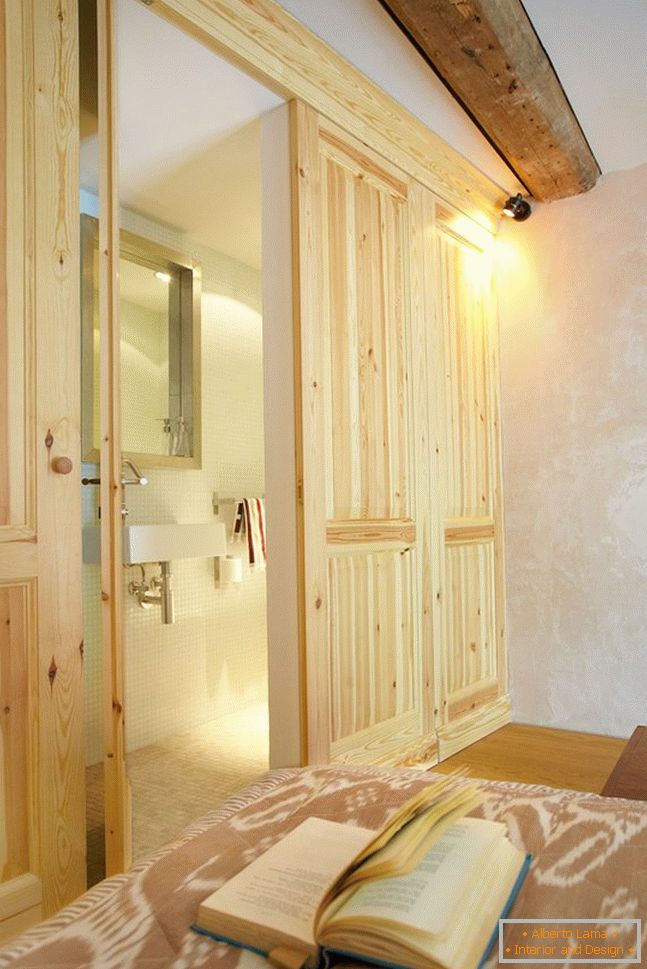 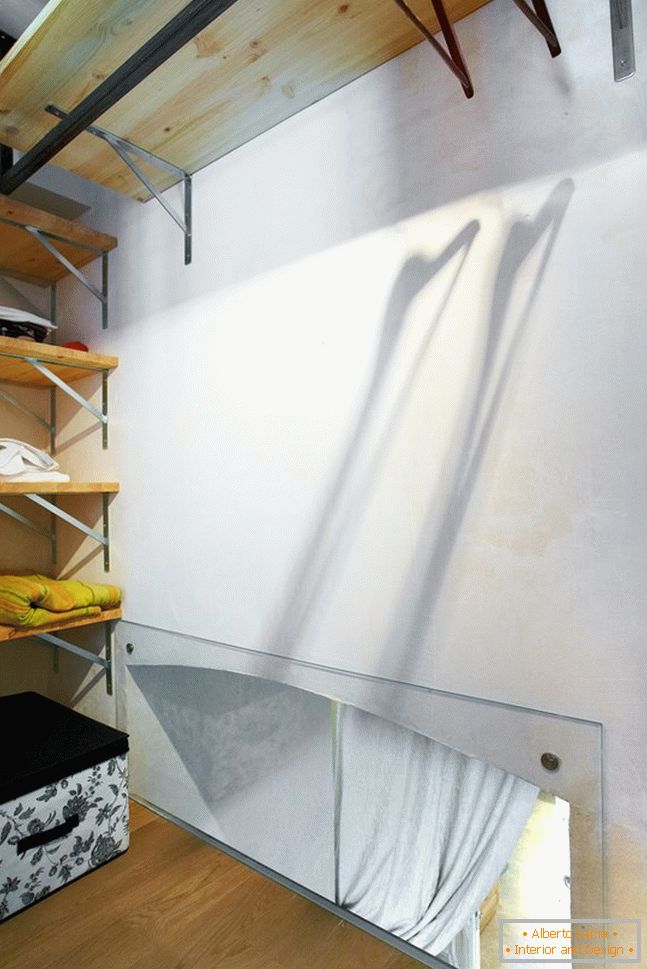 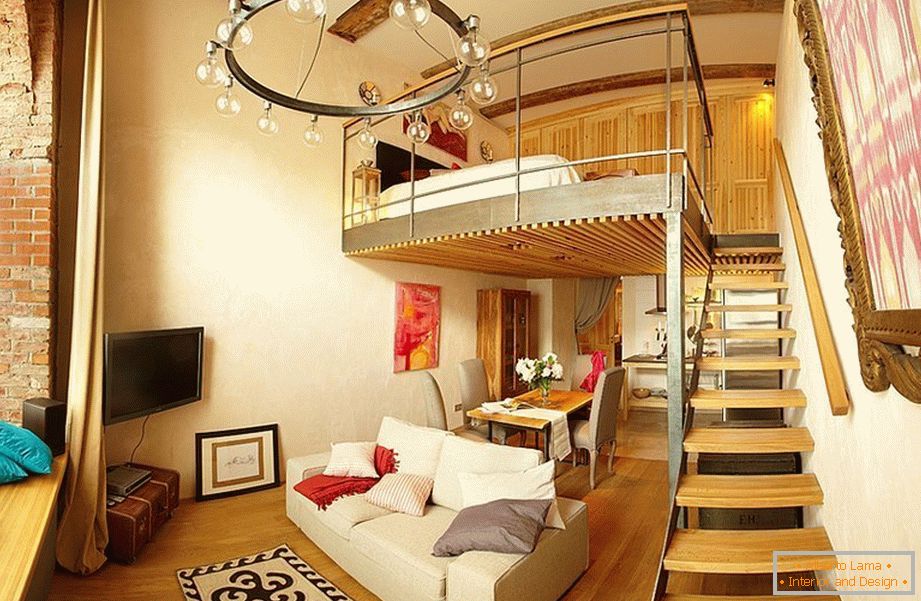 Work with lighting - so say the creators of the interior - was most interesting. In order to illuminate such a large space, a unique chandelier was designed and created. In her favor, the ineffectiveness of point lighting in this apartment has been declined. But the second tier decided to light up the floor lamps, the large lamps of which surprisingly resonate with the chandelier.

To give the room an intimate atmosphere, decided to install a sconce with candles. Their fire, reflected from the plane of mirror plates of an interesting shape, creates an amazing play of light.

As for the color in the interior. Since there were no wishes, we decided to use the monochrome of walls and textiles. This advantageously emphasizes the wooden parts and the old masonry of the brick. As for the bright accents, they are present on the canvases of paintings and soft pillows.

Specialists from the design studio adore everything ancient and old, and in this design they were able to point out their addiction. The apartment was not plastered with old masonry made of bricks both on the walls and in the openings of windows.

After the plaster was removed from the ceiling, the designers discovered wooden beams, they were cleaned and left unpainted, in several places one can even see a protruding birch bark.

Take a closer look at the photo, and you will be able to notice the old chest and suitcases that help to give this room a special kind of "historic house". 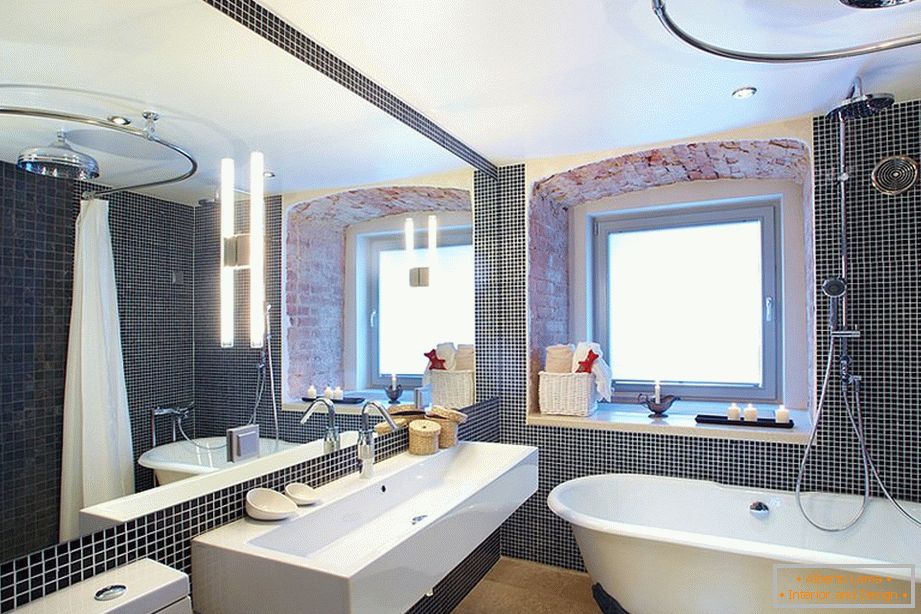 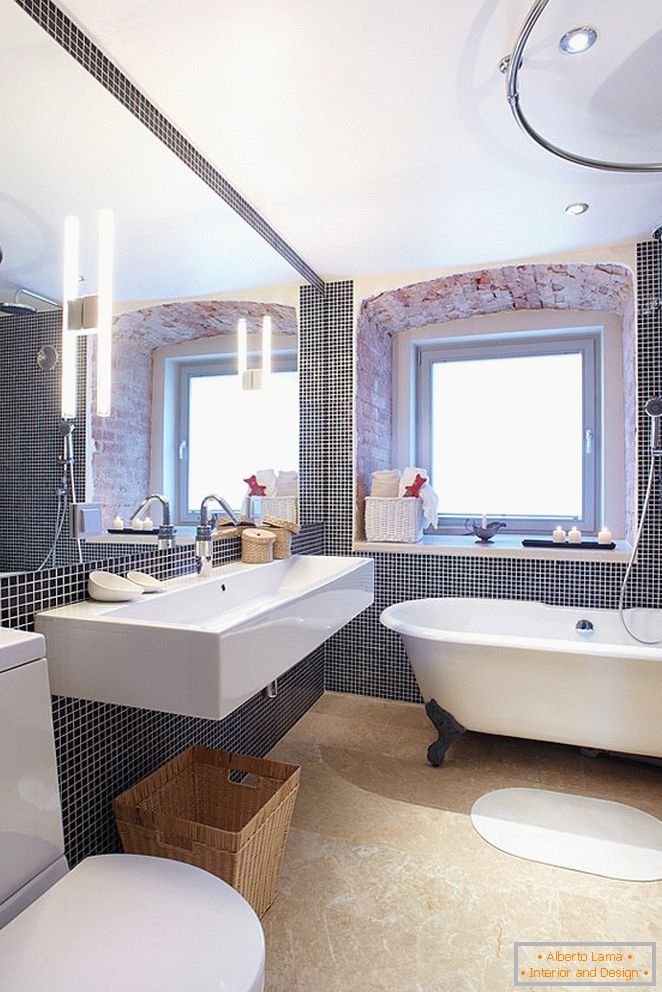 When they began to furnish, it turned out that the budget is not great. Therefore, preference was given to inexpensive subjects. The choice of furniture, the design of the staircase, lighting - all this was created with the consent of the client.

For this apartment was created a structure for the second tier with a convenient small staircase, equipped with handrails. Behind the panels, located at an angle, the shelves and the bathroom were hidden.

The kitchen counter and a few unique items that fit perfectly into the design were created according to the sketches of the studio architects.

The TV stand, in which a large number of CDs are now stored, was made from an old suitcase that was once popular. But the chandelier, which is located in the main room, was created at the North plant. 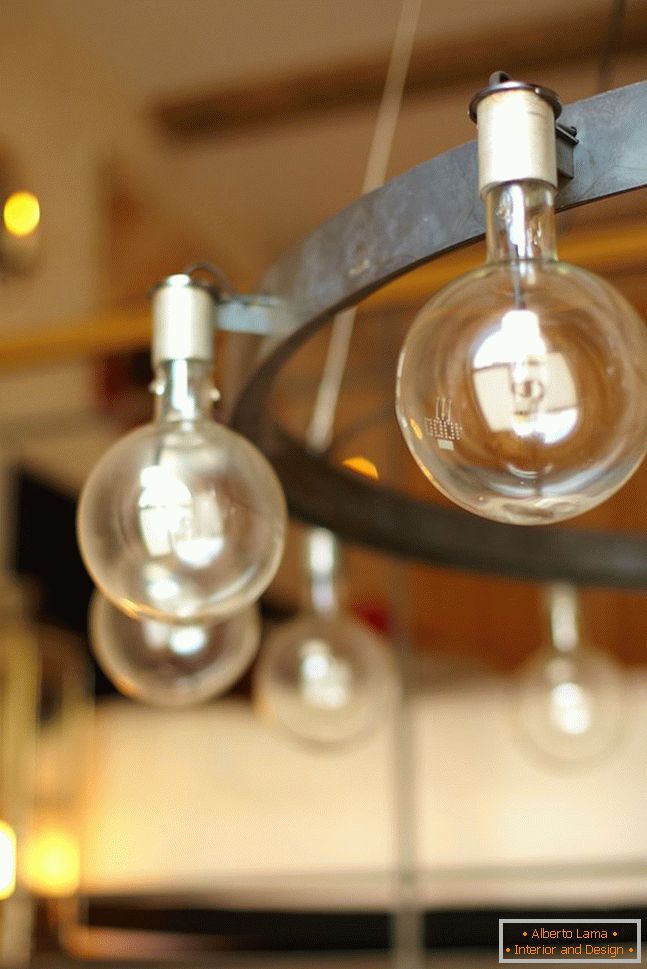 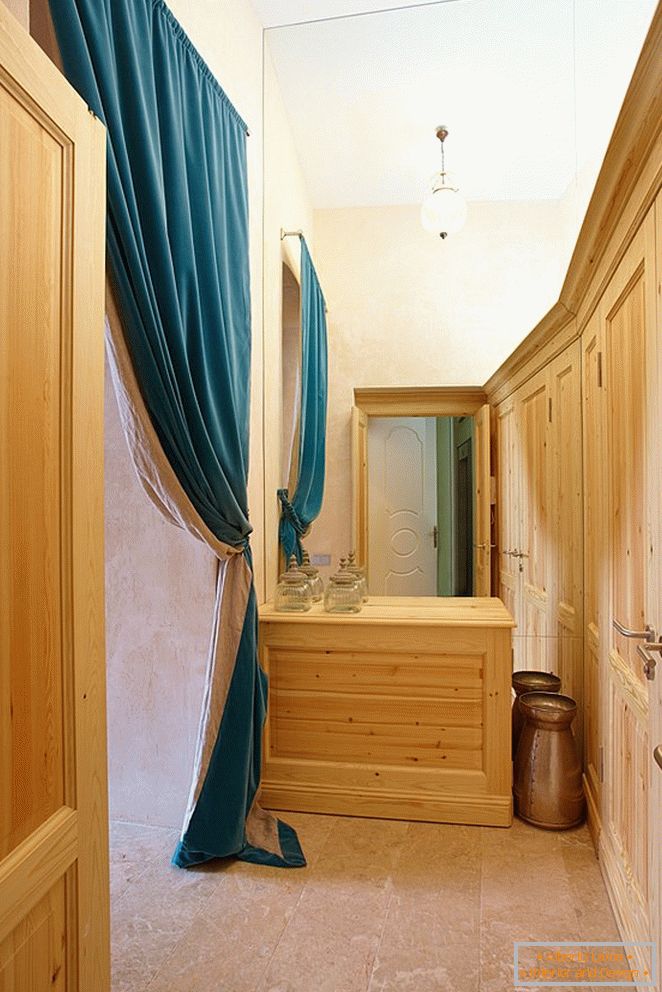 That's what designers of the studio Architales think about the project: "Pride - it sounds too pathetic. We managed to solve many difficult tasks, and are satisfied with our achievements. The lucky elements include a second level with spacious closets and a concealed bathroom, a chandelier and a staircase. " 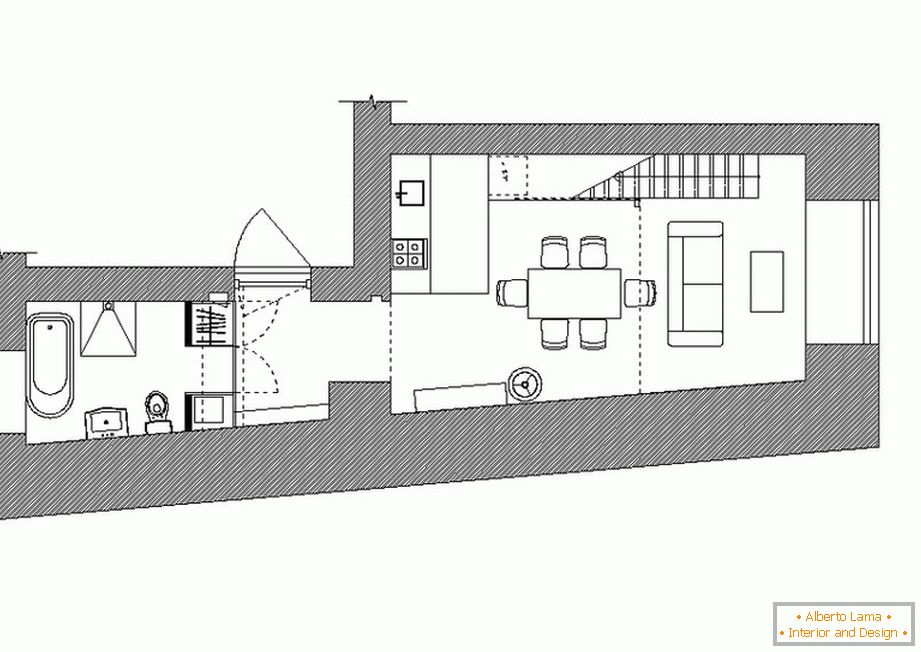 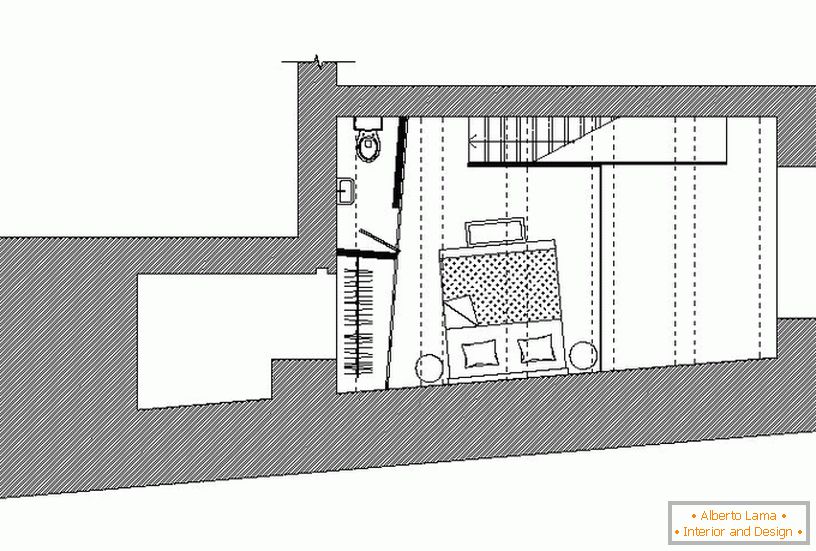 Dressing tables of the past

Around the world: the 10 most beautiful waterfalls in